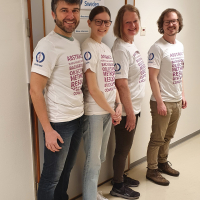 This year Cochrane Sweden is celebrating its 5th anniversary. The center was established on the 17th of May 2017, in the city of Lund.

Over the past five years, Cochrane Sweden has been busy promoting evidence-based decision-making in healthcare in Sweden. Some accomplishments have been providing learning tools on how to conduct, edit and read systematic reviews. Cochrane Sweden has launched Cochrane Interactive Learning being a part of the curriculum for medical students at Lund University to support training in evidence-based health care. Cochrane Sweden is also the first Cochrane group to get unlimited access to Cochrane Interactive Learning. This has led to Sweden having the highest number of users per inhabitant in the world. Moreover, the strategic and fruitful collaboration with Lund University has provided unlimited access to Covidence and, in the coming days, to RevMan Web.

Each year Cochrane Sweden also provides many workshops, courses, and lectures about Cochrane, systematic reviews, evidence-based medicine, and more specialized topics, such as reviews of non-randomized studies, diagnostic test accuracy reviews and complex meta-analyses. We have trained hundreds of PhD students in the Cochrane methodology, and some of them have become Cochrane authors. Eleven master medical students have prepared their master theses at our centre. In 2017, Cochrane Sweden launched the Cochrane International Mobility program. Since then, more than 20 people have participated in this international exchange program to learn more about evidence-based medicine through collaborations between Cochrane Sweden and other Cochrane centers. You can read some examples of the researchers experience with the program here. We are much grateful to all members of our Advisory Board, which includes Swedish health professionals and Cochrane staff from six different groups, for their generous and qualified guidance.

For the past five years, Cochrane Sweden has been busy producing new research. So far, researchers affiliated to our center have completed 22 new or updated Cochrane Reviews, published 25 new Cochrane protocols and 38 other journal articles and reports. This has led to us often being mentioned in international and Swedish media. Currently, we also have 19 protocols and reviews in preparation. Several of these reviews have been commissioned by national and international stakeholders, including the World Health Organization.

Furthermore, Cochrane Sweden has also collaborated with other centers through the Scandinavian GRADE Network. In 2022, we led the establishment of the network together with Cochrane Denmark, Cochrane Norway, SBU, the Danish Health Authority and the Norwegian Institute of Public Health.

Our team has also grown up! In 2020, Martin joined as project coordinator, and indeed is coordinating lots of projects, from training to research and dissemination; Katarina is brilliantly delivering administrative support to our activities and contributing to develop new projects; in 2022, also Lea became part of the staff: she contributes to daily operations and ongoing research, such as the Swedish trial transparency report.

Visit the Cochrane Sweden website here, or drop-in at our office!